RELICS delivered 323 candidates at z ~ 6 – 10, galaxies likely observed 1 billion to 500 million years after the Big Bang (Salmon et al. 2017, 2018). These include the brightest objects known in the first billion years: galaxies at z ~ 6 lensed to 24th magnitude or brighter. And the 2.5" long z ~ 10 arc is the only well-resolved galaxy known in the first 500 million years, which will enable us to study its inner structure and kinematics in the near future with ALMA and JWST. We expect to confirm the z ~ 10 redshift by detecting [OIII] 88 µm in upcoming ALMA observations (PI Tamura). First identified in Hubble images, analysis of Spitzer images was crucial to vet our z ~ 10 candidates. Spitzer will also yield stellar mass and age estimates for all of our high-redshift galaxies. 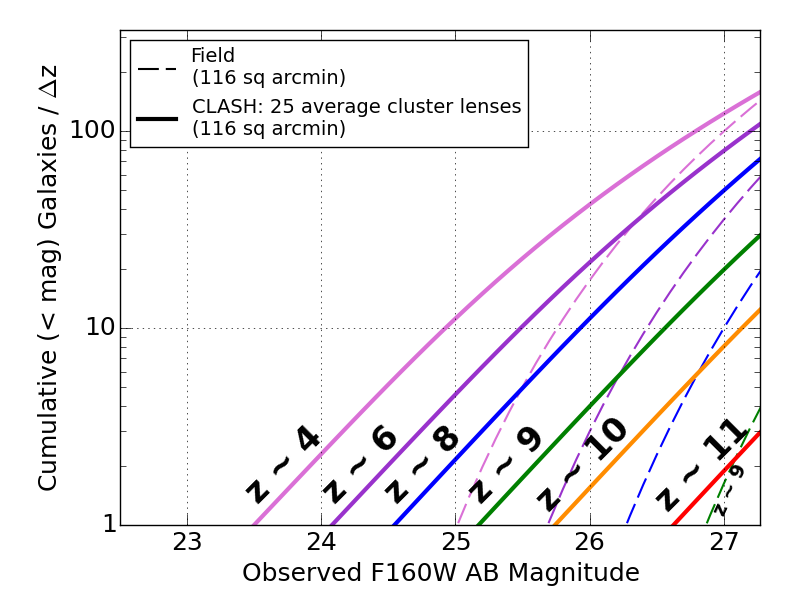 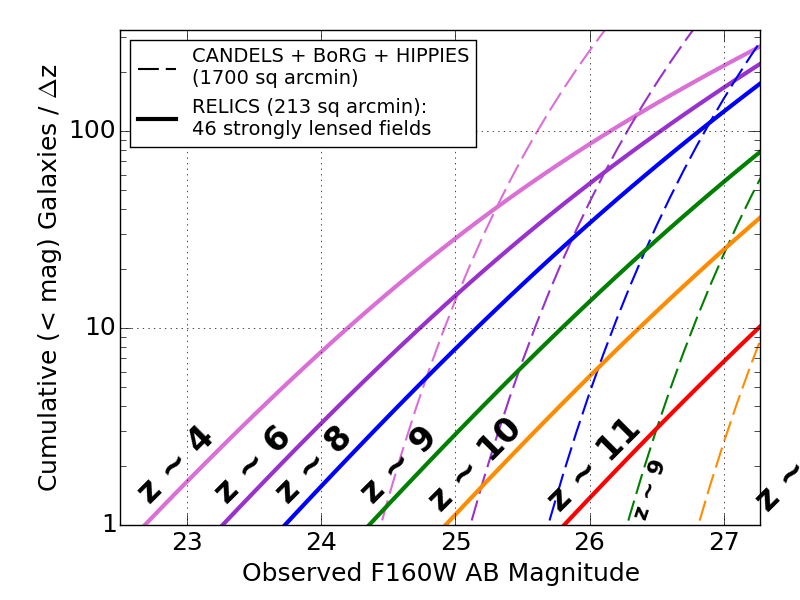 Follow-up study of such bright high-redshift candidates will yield high-redshift confirmations and properties with UV metal lines such as CIII]1909Å and longer wavelength lines such as [OIII] 88 µm with ALMA. Highly magnified galaxies will reveal morphologies, star forming clumps, and kinematics. We will learn if some early galaxies were especially pristine, consisting mainly of first-generation Pop III stars, and if others were surprisingly dusty and evolved.

Below: Examples from other observing programs of spectroscopic confirmations and properties measured in brightly observed high-redshift galaxies.

Lens model magnification estimates are required to study some properties of our distant lensed galaxies. RELICS has undertaken a large effort to model all 41 of our clusters, many for the first time. We are publishing our results (Cerny et al. 2018; Acebron et al. 2018; Cibirka et al. 2018; Paterno-Mahler et al. 2018) and delivering our models to the public via MAST. 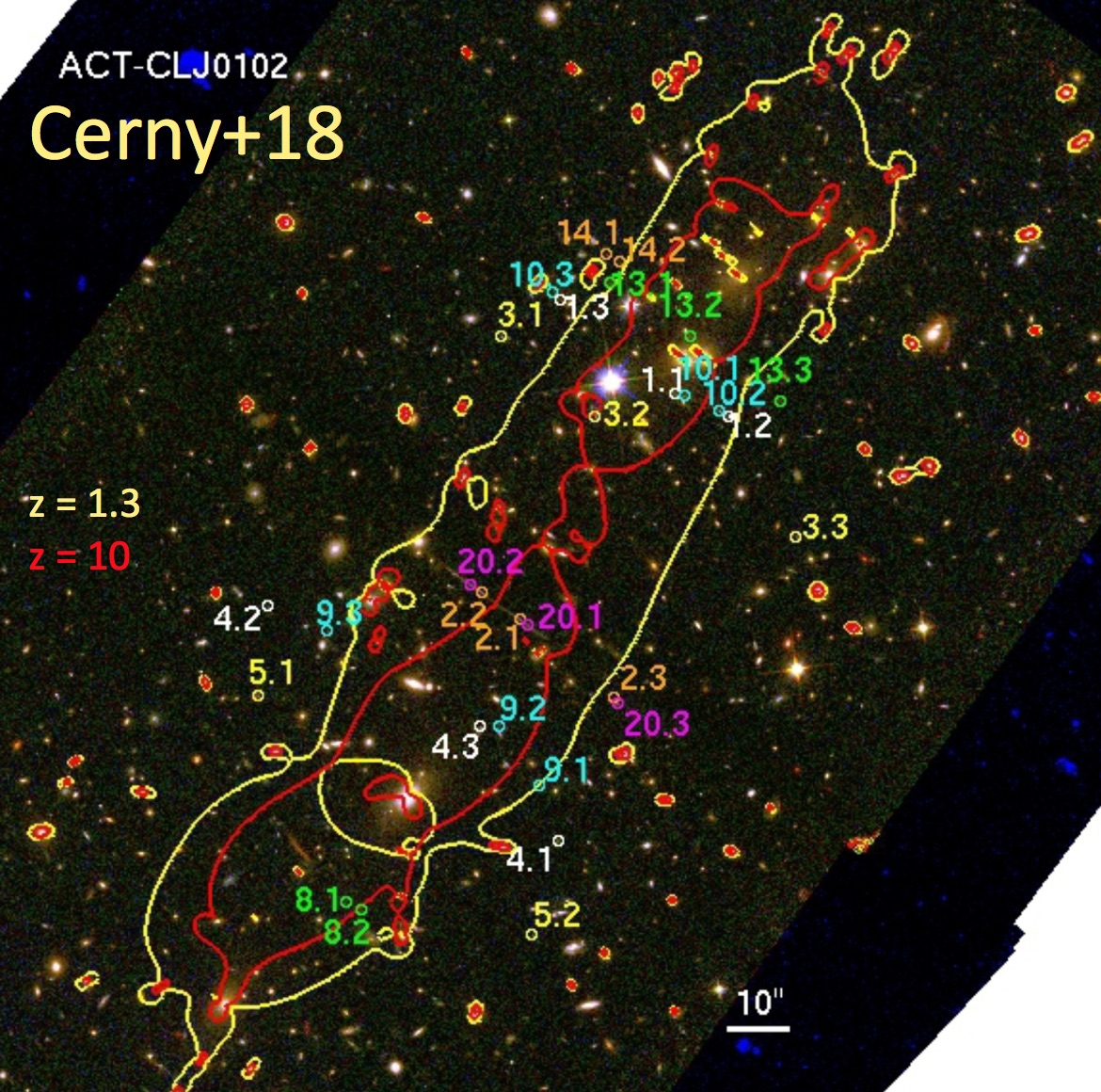 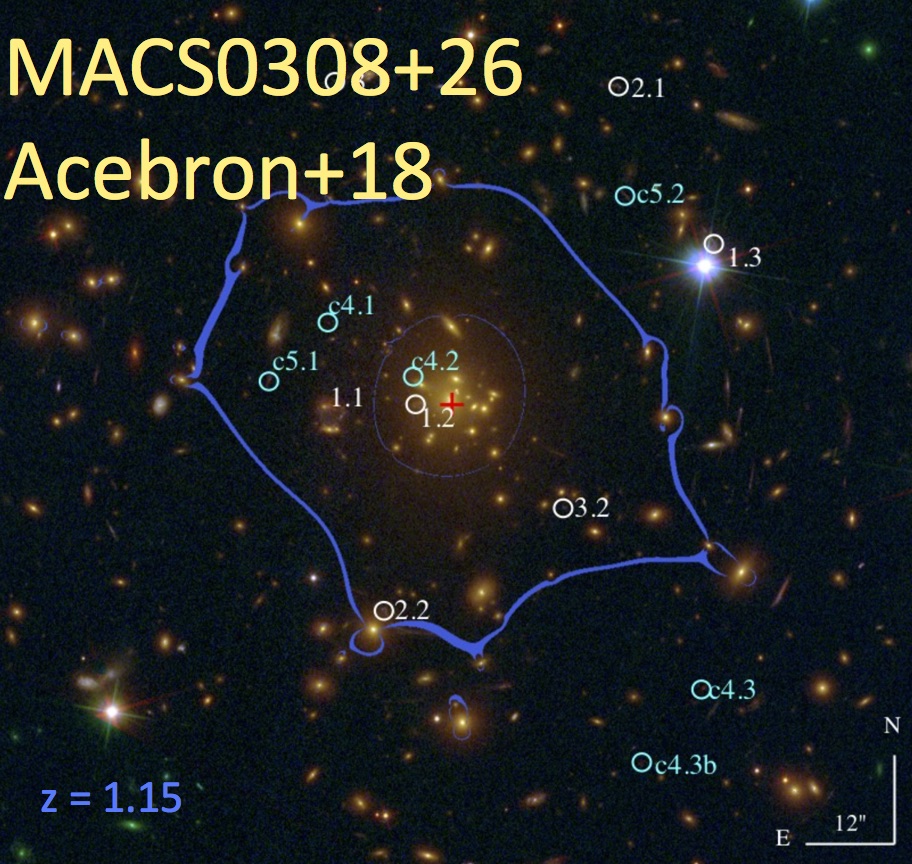 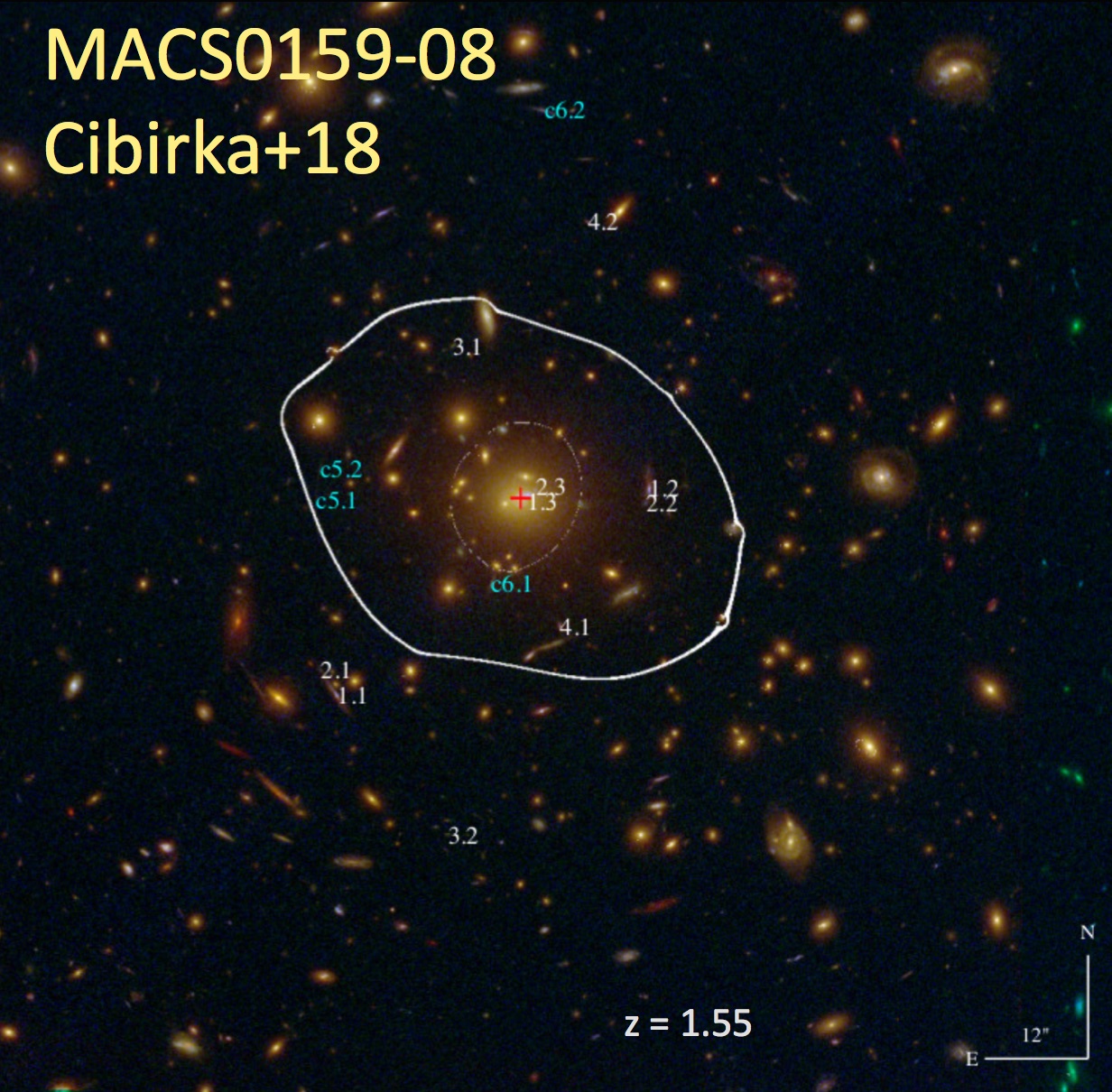 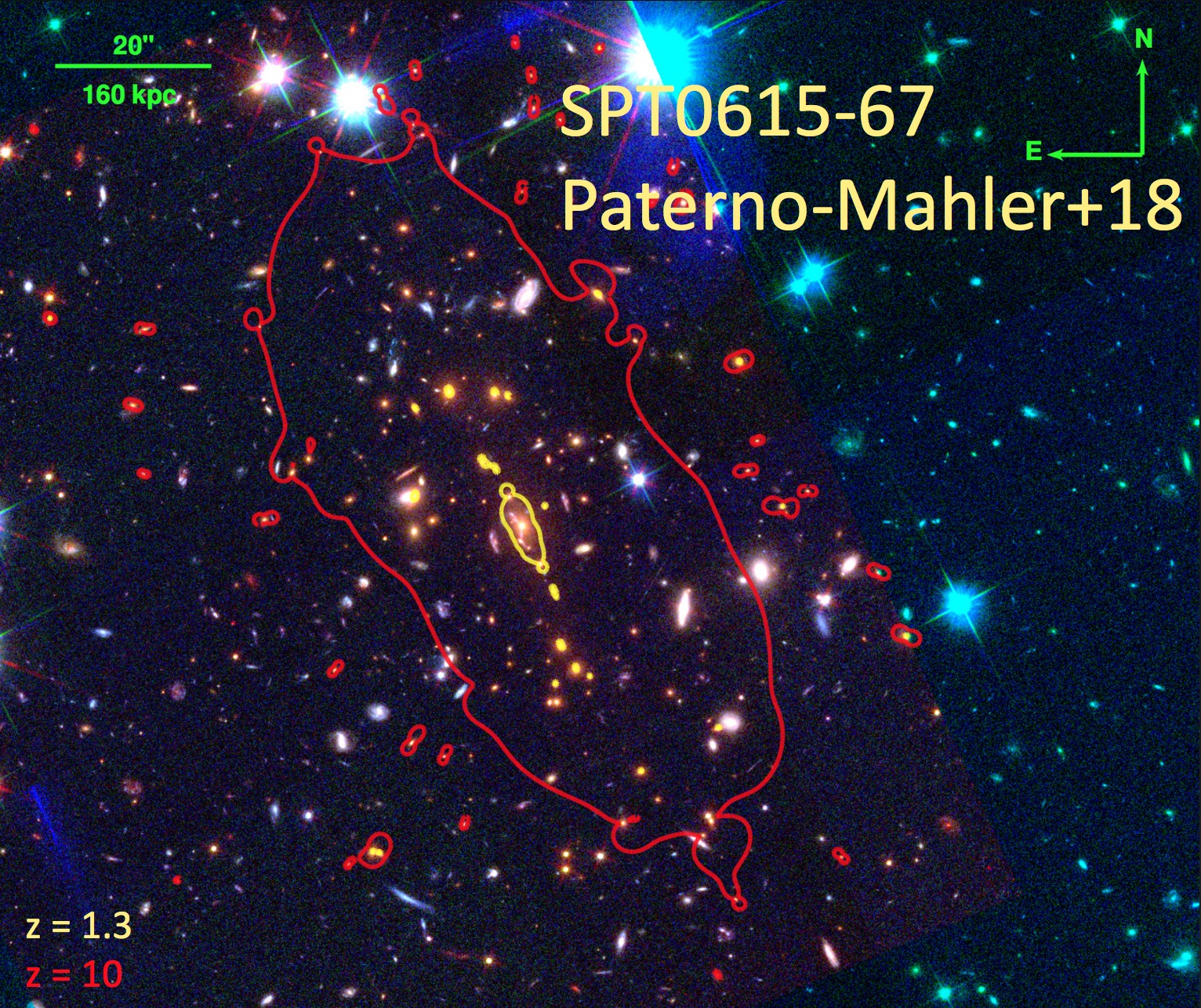 While Hubble images yield strong lensing analyses of the cluster cores, wide field imaging is being obtained with ground-based telescopes as needed to observe the full clusters and perform weak lensing analyses. Joint lensing + X-ray + SZ analyses will improve the precision of mass scaling relations and tighten limits on the dark matter particle cross section. Well-calibrated mass estimates are critical to constraining cosmology and realizing the full potential of future missions such as eROSITA, which anticipates detecting 100,000 clusters / groups out to z ~ 1.3.


Below Left: Lensing observed in pre-RELICS imaging reveals mass (blue) and X-rays reveal gas (red) in the Baby Bullet cluster merger. Gas particles collide and get left behind, unlike dark matter particles.
Below Right: Lensing + X-ray + SZ analyses of all RELICS clusters would help calibrate SZ mass estimates, which have underestimated the most massive clusters in some previous analyses. 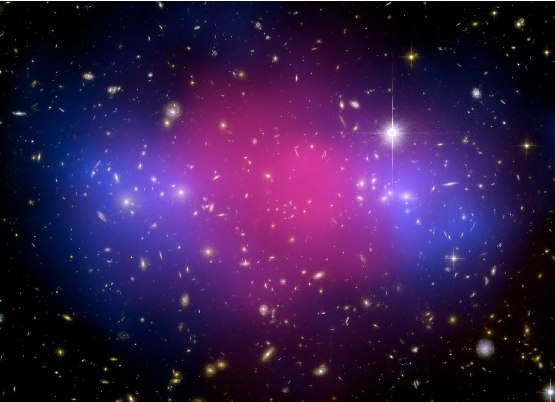 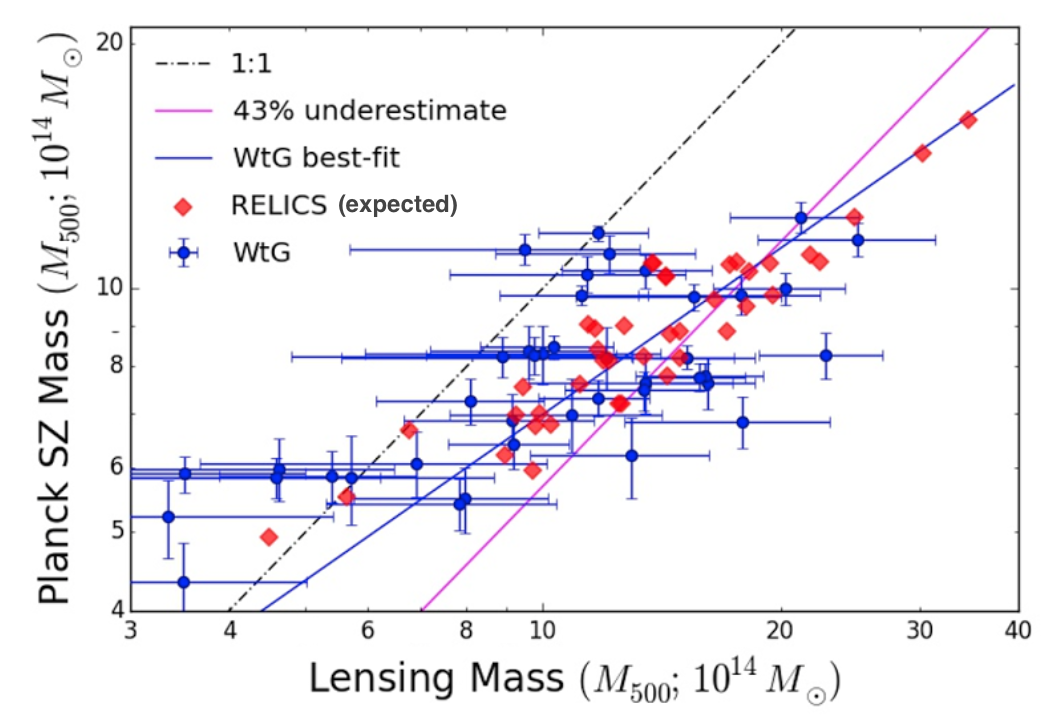 Below from the Frontier Fields program: Supernova Refsdal lensed to form multiple images by MACS1149. 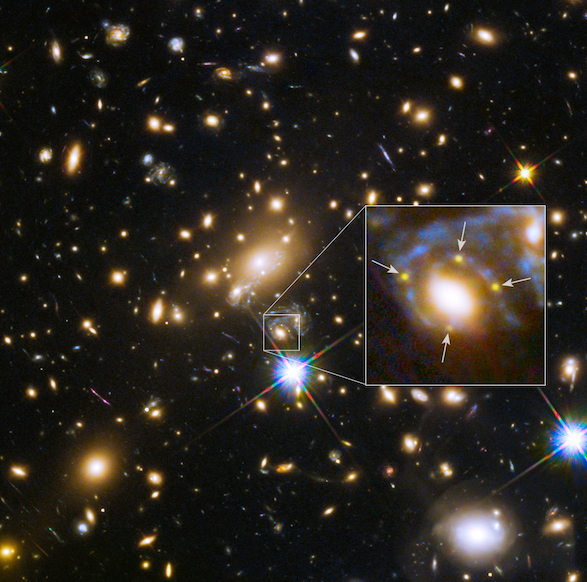